Get to know the Brazilian soccer stadiums that use solar energy 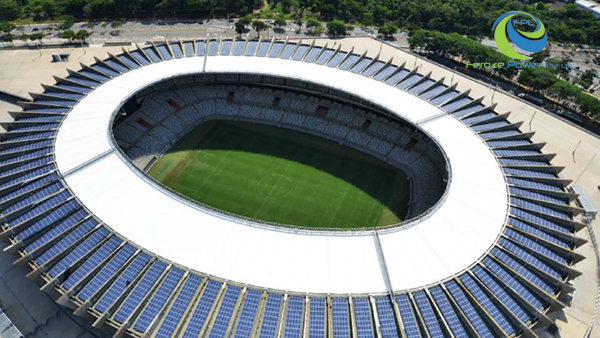 Get to know the Brazilian soccer stadiums that use solar energy

The fans can’t see. But some Brazilian stadiums have photovoltaic solar energy systems. Sporting spaces, in addition to contributing to a cleaner planet, save on average 30% with spending on electricity. It’s an idea that could well spread to other stadiums, isn’t it? If you, the reader, know of another example around the world, tell us.

In Mineirão, host stadium of the 2014 World Cup, the system works with about 6,000 panels and generates the equivalent of an average consumption of 1,200 homes, according to data from Cemig, a power concessionaire in MG. The adjustment was made before the World Cup.

Also refurbished for the World Cup, Fonte Nova, in Salvador, installed a system capable of generating 750 MWh per year – equivalent to the average consumption of 3,000 Brazilians or what is needed to supply 625 Bahian homes. The investment is the result of an agreement between Coelba and Fonte Nova Negócios e Participações.

Despite not being among the stadiums that will host 2014 World Cup games, Pituaçu, also in Salvador, appears as another venue that generates its own energy. The space was the first to adopt solar energy in Latin America. R $ 5.5 million were invested. The sports plant has already produced 600 megawatts / hour (MWh) per year, which is needed to supply 540 Bahian homes with average consumption. A savings of $ 161,000 per year.

First solar plant in that state, the system has the capacity to generate 1,500 megawatt hours per year, enough to solve the consumption of six thousand people. The São Lourenço da Mata Solar Plant, the city where the stadium is located, is responsible for up to 30% of the energy consumed by the stadium, which hosted World Cup games in 2014. The system consists of 3,652 photovoltaic solar panels. The investment for the construction of the plant was R $ 10 million.

Have you thought about having this technology combined with sustainability in your home too? Adopt your own solar generator and start producing your own energy. Check out our  financing lines  and get a  free simulation  right now!